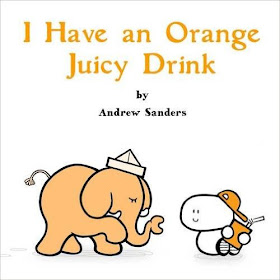 We're always on the lookout for quirky books even if they're a bit 'young' for Charlotte...

"I Have an Orange Juicy Drink" is such a book, quirky and original - feeling as citrussy-fresh as, well a nice refreshing juice box.

A little boy has a lovely orange juicy drink, it's so tasty, so juicy, so refreshing but various characters covet that drink themselves. Luckily the boy knows exactly how to deal with rude snatchy people!

But what happens when the boy's brother (who, amusingly, loves wearing his pet duck on his head) comes along and wants to try a bit of that drink? Will he end up squished, splatted and discombobulated like the nasty characters that came before him?


It's a neat little lesson in asking nicely, sharing and brotherly love wrapped up in a wholly original and purposely simple story that effectively puts across its main points with dashes of humour (and of course a dash or two of orange!)

We should point out that no nasty snatchy characters were harmed in the making of this book, as you'll find out later on in the story.

Charlotte's favourite bit: Owch! Being squished by the moon must smart a bit!

Daddy's favourite bit: A lovely little moral lesson bursting with orangey originality! Juicy and refreshing and it won't rot your teeth either!

(Kindly sent to us for review by Fat Fox Books)

"I Have an Orange Juicy Drink"

Written and Illustrated by Andrew Sanders