Kings of the Castle by Victoria Turnbull (Templar Publishing) 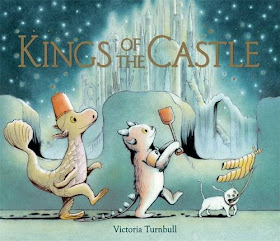 Sometimes a book demands to be read several times, releasing its subtle message slowly, like the delicious smell of bread baking...
So it is with "Kings of the Castle" by Victoria Turnbull.

The book opens with an adorable little monster character named George who wants to spend his playtime wisely. Not moonbathing or lazing around, or playing with his busy little dog Boris, but building the most perfect sandcastle the world has ever seen.

Just as George is getting started, a strange being emerges from the ocean. A weird monster unlike anything George has ever seen before.

The monster doesn't seem to understand George at all (in fact he seems to understand Boris better!) and George wanders off frustratingly. But thanks to Boris's frantic barking, George realises that there is a way they can communicate after all!

Drawing pictures in the sand, George finds out the creature's name is Nepo, and soon the two begin building a true behemoth of a sandcastle (that actually genuinely made Charlotte gasp thanks to one HUGE page spread that unfolds gatefold style into a massive illustration! Loved that bit!)

The two play together, build together - and as the ever-encroaching sea comes in to wash away their amazing creation, both realise that they've found a new friend.

Whether intentionally or unintentionally, Victoria's book conveys a message to us that we may have misconstrued but felt like it was hugely relevant to what's going on in the world at the moment. A stranger emerging from the sea, unable to speak George's language. George's initial frustration but eventual acceptance when he realises that the strange monster is really just like him. That has to be one of the sharpest and most delicious pieces of symbolism I've seen in a kid's book in a long time.

Daddy's favourite bit: Beautiful and dreamlike, with the most subtle and deliciously delivered symbolism. Amazing piece of work!

(Kindly sent to us for review by Templar Publishing)

"Kings of the Castle"

Written and Illustrated by Victoria Turnbull