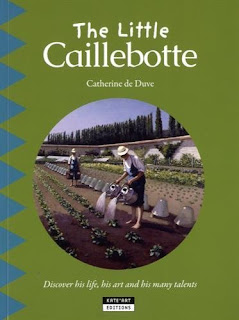 Another glorious art exploration now from Catherine De Duve as we take a closer look at the life and work of Gustave Caillebotte...
In "The Little Caillebotte" Catherine De Duve places the spotlight on one of the most technically accomplished and celebrated artists of the 19th Century. Though short-lived (Caillebotte died at the age of 45), his amazing body of work showed that he packed an awful lot into a relatively short career.

Catherine's book details the other aspects of Caillebotte's life. His life-long love of gardening is celebrated here, and often his garden would feature heavily in his work. Caillebotte's style ranged from intense realism to more esoteric and impressionist work later on in his career but it's his amazing attention to detail and his expertise in portraying the human figure that garners him the most recognition.

As with other titles in the fantastic "The Little" range, this book is packed with information and glorious reproductions of the works of Gustave Caillebotte, a perfect springboard for children to discover art and artists. Sheer brilliance!