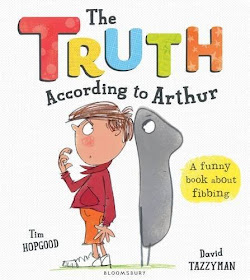 Now here's a neat story that warns of the snowball effect of telling a tiny fib...which quickly spirals out of control...!
In "The Truth According to Arthur", Arthur is in deep doo-doo. He's been riding his brother's bike - despite being told not to, and after a bit of spectacular stunt riding, Arthur has not only trashed the bike but put a lovely deep scratch right up the side of mum's car.

Arthur tries to think up a credible story to cover up his naughtiness - and out pops a dour grey character who hangs around listening to Arthur's ever-increasingly unlikely stories, related to friends who he tells his tale of woe to.

Arthur soon realises that the only way to get rid of this sad grey fib is to tell the truth. But what will Mum do? Will she flip out? Or will she be pleased that he was honest and came forward to tell her exactly what happened?

I'm pretty sure you can guess the rest. Tim and David are a fantastic storytelling duo who bring to life a simple moral tale to make it zippy and zappy, and actually a lot of fun (even if you do remember being in Arthur's place, and squirming at the thought of how you tried to fib your way out of putting a rather nasty burn in mum's new carpet once. Eeps!)

Charlotte's best bit: When Arthur spins a tale of a stunt-riding alien and the car turning into a giant robot!

(Kindly sent to us for review by Bloomsbury Publishing)

"The Truth According to Arthur"