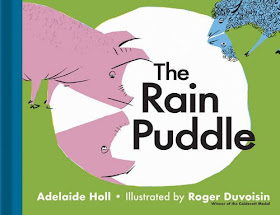 We've often talked about how brilliant it is to see classic children's books being brought back to life and reprinted...
Once again Bodleian Publishing are leading the charge with some fantastic new releases, including "The Rain Puddle" by Adelaide Holl and Roger Duvoisin - a fantastic Caldecott Medal winner back in the 1960s.

First published in 1965, this book instantly reminded us of the classic children's stories like Henny Penny and Chicken Little. In fact the story starts out with a silly old hen who one day stumbles across a rain puddle in the farmyard.

As she looks into it, she spots a poor chicken staring back at her!

Mistaking her own reflection for a poor drowning bird, the Chicken rushes off around the farmyard raising the alarm, as all the other animals take a look and are similarly mistaken.

Thankfully as the sun emerges and the puddle dries out, the animals think their counterparts have made their own way out into the sunshine and are no longer in danger. Hooray!

It's the sort of book that's going to be hugely popular in early years, a fabulous fable that allows kids to join in with all the animal noises and actions, with bright bold illustrations from a true master of his craft.

Roger Duvoisin's own picture books are utterly legendary in their own right but teamed with Adelaie Holl, the two have put together a fabulously entertaining story! Gloriously reprinted and presented here in the original cloth-bound format it would have been released in, it's a treasure to keep for generations to come.