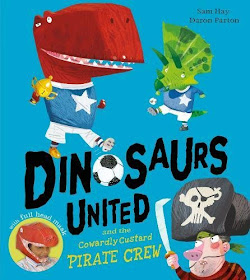 We love books that go beyond a single theme and branch out into what we call 'fusion titles' - offering a little something for everyone...
At first glance you might mistake "Dinosaurs United and the Cowardly Custard Pirate Crew" by Sam Hay and Daron Parton as "Just another footie / pirate / dinosaur" book but it's actually a hugely entertaining first book in an intended eventual series, pitting the world's greatest Dinosaur football team against a series of nefarious foes.

It may be ground we've seen trodden before (in Middle Grade with the "Frankie's Magic Football" series taking a similar approach) but this one has appeal for much younger kids, and a hilarious slapstick set of scenes to tickle their funny bones.

They’re fast and fun and always on the ball, which is just as well because their opponents will use every sneaky trick in the book to win the cup!

In their first adventure, the amazing Dinosaurs United go head-to-head against the Cowardly Custard Pirate Crew! But oh no – they’ve lost their kit, and they have to use their wits and football skills to find it!

Can the dino team club together to defeat the dastardly pirates and win the match?

We love the fact that this one comes with an actual dinosaur head (alas, too tiny for our massive heads but perfect for little ones). Hugely collectable and fun, join the team today!

C's best bit: Jamming her head into the cool T Rex cardboard head at the back of the book.