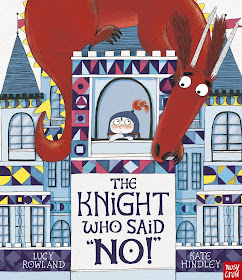 Every parent on the planet will remember the exact moment their child first learned the power of a single word...
That word is "NO!" and in "The Knight Who Said No!" by Lucy Rowland and Kate Hindley, a tiny little knight named Ned actually starts out in the story as the most helpful little chap you can imagine.

Ned always makes his bed, he always helps out around the house, loves to go out and play and is one of the nicest most polite little boys you could hope to meet.

But the kingdom lives in fear of nightly visits - visits from a large roaring red dragon who terrifies everyone who sees it.

When Ned and the Dragon 'meet' for the first time, an unlikely friendship is struck - but not before Ned learns that terrible word. His whole character changes. Instead of saying "YES!" to everything, Ned starts to become "The Knight Who Said NO!" and his whole attitude changes (we predict that those going through the terrible twos, the tantrum threes, the foul fours etc etc will know what we're talking about here).

But with his new friend, the Knight just might have a change of heart.

A great little story about friendship, and of course a gigglesome treat for little ones who (hopefully) might take a few cues from this tiddly little Knight after he gets over that whole "NO!" thing. Really loved the illustrations in this one too, tons and tons of character and charm.

"The Knight Who Said No!" by Lucy Rowland and Kate Hindley is out now, published by Nosy Crow (kindly supplied for review).
ReadItDaddy at April 23, 2018
Share
‹
›
Home
View web version