More from the "How Rude!" Blog Tour with our review of this hilarious new picture book by Clare Helen Welsh and Olivier Tallec (Words and Pictures) 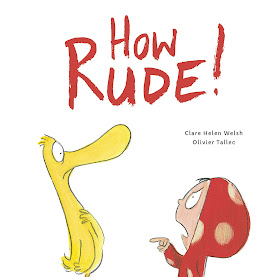 "Manners maketh the Man" or so the saying goes. But what of the duck?!
Most ducks we've ever met have been a fairly rude lot, to be honest. Daffy Duck wasn't exactly a shy retiring wallflower, waiting his turn to be asked before diving in on your party sandwiches. Donald Duck? Pretty much a seething ball of anger.

But in "How Rude!" by Clare Helen Welsh and Olivier Tallec, be prepared to meet the rudest duck of all.

The problem is, as soon as Duck arrives he begins doing all manner of things to upset the party mood.

He's worse than "The Tiger Who Came To Tea", licking the insides of sandwiches (then putting them back on the plate), spitting tea (which gave us a real tea-spitting moment, though of laughter rather than us just being our usual gross selves).

Whatever will Dot do to teach this naughty duck some manners as he becomes ruder and ruder still?

As we well know at home, never underestimate the power of a little girl to put things right. Dot does just that in a hilarious way that might just give your littlies food for thought, and perhaps teach them a few things about good graces and manners into the process.

It's such a simple idea for a story, but very nicely executed here. Fab flowing text from Clare and awesome simple illustrations from Olivier make this a fab little read.

Don't forget to check out all the other stops on the fabulous "How Rude!" blog tour, with these awesome bloggers below!

"How Rude!" by Clare Helen Welsh and Olivier Tallec is out now, published by Words and Pictures (kindly supplied for review).