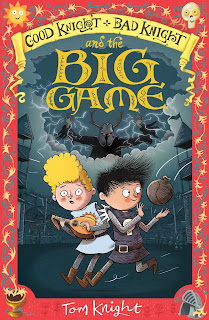 Welcome, welcome to another fantastic Chapter Book Roundup. With it being September, and September usually meaning a complete TRUCKLOAD of new children's book releases, you'd expect our postbag to be bulging - and it is!

So let's kick off with a book by an aptly-named author. "Good Knight, Bad Knight and the Big Game" by Tom Knight is a medieval romp with a ton of spookiness.

When Berkley comes back to school, he discovers that his dragon battling abilities have made him the most popular kid in class.

He loves the attention and coasts on his fame, but his cousin, Godwin (AKA Good Knight), is not impressed when Berk lets his popularity go completely to his head. There's a new menace in town, and a battle royale on the horizon and it might be time to join forces!

"Good Knight, Bad Knight and the Big Game" by Tom Knight is out now, published by Templar Publishing. 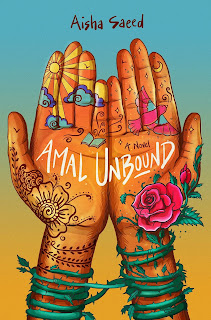 Next, a hugely impressive and touching story of one girl's struggle to realise her potential amidst colossal odds.

In "Amal Unbound" by Aisha Saeed, life is quiet and ordinary in Amal's Pakistani village, but she had no complaints, and besides, she's busy pursuing her dream of becoming a teacher one day.

Her dreams are temporarily dashed when - as the eldest daughter - she must stay home from school to take care of her siblings.

Amal is upset, but she doesn't lose hope and finds ways to continue learning. Then the unimaginable happens - after an accidental run-in with the son of her village's corrupt landlord, Amal must work as his family's servant to pay off her own family's debt.

Life at the opulent Khan estate is full of heartbreak and struggle for Amal - especially when she inadvertently makes an enemy of a girl named Nabila.

Most troubling, though, is Amal's growing awareness of the Khans' nefarious dealings. When it becomes clear just how far they will go to protect their interests, Amal realises she will have to find a way to work with others if they are ever to exact change in a cruel status quo, and if Amal is ever to achieve her dreams.

A story of hope and bravery, "Amal Unbound" by Aisha Saeed is out now, published by Nancy Paulsen / FMcM Publishing. 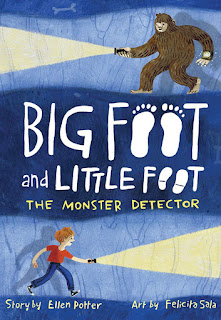 Next, another slice of hairy-footed fun in "Big Foot and Little Foot: The Monster Detector" which is book two in Ellen Potter's fabulous series, with art by Felicia Sala.

Hugo is a young Sasquatch.

Boone is a young boy.

After an unlikely encounter, they’ve become an even unlikelier pair of best friends. After saving up his Monster Card wrappers, Hugo sends away for a special prize in the mail―a Monster Detector!

Using the watchlike device, Hugo quickly spots a monster right in his own cavern. Spooked, but still excited about his prize, Hugo heads to school and finds yet another surprise―his friend Boone!

Boone announces he wants to go to Sasquatch school, but no human has ever gone before, and not everyone is as happy about it as Hugo. Boone’s first day of school gets off to a rocky start, but Hugo doesn’t have much time to worry before he makes another monster sighting and takes off after the creature.

What follows are even more surprises, ones that have Hugo rethinking what it really means to be a “monster.”

A great little middle grade series with a rollicking adventure and a huge dose of friendship, "Big Foot and Little Foot: The Monster Detector" by Ellen Potter and Felicia Sala is out now, published by Abrams Books. 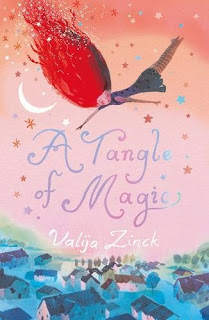 A dose of mystery and magic in our next story, "A Tangle of Magic" by Valya Zinck.

Penelope lives with her mother after the sad loss of her father who died years ago.

She has always been different from other children: for example, her hair has been grey since she was born, and there's always an air of magic about her.

But one day, Penelope wakes up with sparkling red hair and her mother confesses the truth: her father is not only still alive, he's a wizard and it looks like Penelope has inherited his powers.

The plucky young girl is about to realise her destiny - to track down her father and find out more about her mysterious powers, and how to use them for good.

"A Tangle of Magic" is the type of middle grade fantasy we absolutely love - driven by a strong female character, both inspirational to girls who admire characters with a ton of bravery and pluck, yet an air of enigmatic mystery about them.

Full of atmosphere and charm, "A Tangle of Magic" by Valya Zinck is out now, published by Chicken House. 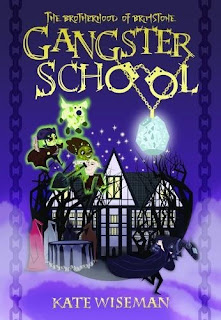 Next, the follow-up to a blisteringly funny debut from author Kate Wiseman and new publisher Zuntold.

"Gangster School: The Brotherhood of Brimstone" by Kate Wiseman is another awesome slice of mayhem.

Trouble is brewing at Blaggard's School for Tomorrow's Tyrants.

If it leaves the school grounds, Blaggard's will be destroyed forever and the head teacher obliterated!

Could the evil Brotherhood of Brimstone - an ancient secret society - have anything to do with it?

Once again it's up to best friends Milly and Charlie to find out.

On top of this, Blaggard's is expecting a school inspection from the mysterious Dr X - Chief Inspector of Criminal Schools.

He could turn up at any time, and no one knows what he looks like. Time is running out for Milly and Charlie. Will Dr X appear? And can our heroes defeat the evil Brotherhood, rescue their canine companions and save the day?

A fantastic follow-up full of character and a ton of giggles, "Gangster School: The Brotherhood of Brimstone (Gangster School 2)" by Kate Wiseman is out now, published by Zuntold. 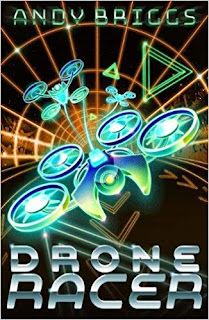 Here's a new adventure series that's bang up to date with one of the hottest trends in tech in recent years.

Introducing Carson and his friends who absolutely love racing drones.

They can't believe their luck when they stumble across a discarded one at a junkyard that just needs a little fixing up.

But this new find is full of surprises. When they power the drone up, it starts talking!

What's more, it's fast. Really fast. They could win big prizes in the racing leagues.

The trouble is, someone wants their incredible drone back, and they'll stop at nothing to get it.

How can three kids protect their new friend?

As blisteringly paced as the sport of Drone Racing itself, "Drone Racer" by Andy Briggs is a thrilling new adventure series, published by Scholastic. 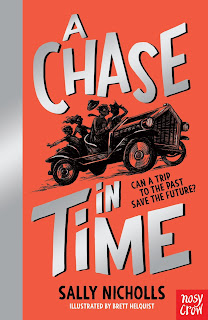 Award-winning author Sally Nicholls offers up a fantastic thrill-ride next in "A Chase in Time" - fantastically illustrated by blog favourite Brett Hellquist.

The mystery begins with an old gilt-edged mirror, which has hung in Alex's aunt's house for as long as he can remember.

The mirror holds a dark secret, it's not just a mirror at all.

Alex hardly notices it, until the day he and his sister are pulled through the mirror, back into 1912.

It's the same house, but a very different place to live, and the people they meet desperately need their help.

Soon they're caught up in car chases and treasure hunts as they race to find a priceless golden cup - but will they ever be able to return to their own time?

An utterly superb slice of time-travelling adventuresome stuff, "A Chase in Time" by Sally Nicholls and Brett Helquist is out now, published by Nosy Crow. 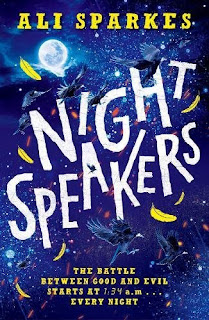 With a sequel coming up soon, let's delve into the paperback edition of a cracking slice of good versus evil.

"Night Speakers" by Ali Sparkes features three children who, night after night, wake at exactly the same time, with no idea why.

It's messing up Elena, Matt, and Tima big time - and fracturing their lives . . . until they venture out into the dark and find each other for the first time.

The sleepless trio realize their astounding power - they can speak any language; they can even communicate with animals.

But something is happening over on the industrial estate-something which is emitting sounds that only they can hear, and killing any winged thing that crosses its path.

There's nobody to fight it but themselves, for only they can possibly understand it and what it means to do.

A new edge-of-your-seat series from award-winning author, Ali Sparkes, with huge appeal for both boys and girls. Fast-paced action adventure about contemporary children with mysterious powers, told with Ali's classic humour and lightness of touch. 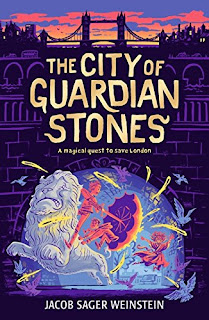 Now a book bursting with originality and quirkiness, featuring a truly unique cast of characters.

"The City of Guardian Stones" by Jacob Safer Weinstein is a thoroughly thrilling story as we join Hyacinth on a magical quest to save London in a uniquely hilarious and inventive fantasy adventure, the second in the Guardian Stones trilogy.

Hyacinth has just saved London, and possibly the world, from a magical conspiracy stretching back centuries.

Not bad for a week of summer holiday. But why is her family linked to the ancient secrets of London? Hyacinth needs to find out, and when she discovers that Ancient Roman stones are being stolen from all around the city, it's time for another adventure with the help of friends new and old, including Oaroboarus, a giant pig in a swimsuit.

A fast-paced caper with a magical cast of characters including the dastardly Minnie Tickle whose skin is inscribed with powerful tattooes, a host of opinionated living stone sculptures, Hyacinth's new neighbour Dasra (who may or may not be trustworthy) and the Corkers: a police force made entirely out of cork.

Utter brilliance which we devoured completely. "The City of Guardian Stones" by Jacob Sager Weinstein is out now, published by Walker Books. 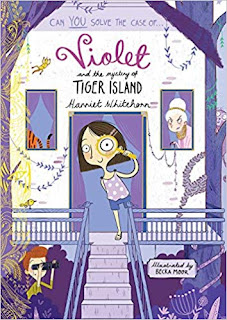 Last but not least, a triumphant return for a series we've loved to bits on the blog. "Violet and the Mystery of Tiger Island" by Harriet Whitehorn and Becka Moor is the latest in the adventure series featuring the plucky girl detective.

It's time to once again join Violet Remy-Robinson, an amateur Sherlock Holmes in the making, on her fifth adventure!

Violet and her friends can’t believe their luck when they’re invited to a wedding on a tropical island. But when old enemies the Du Plicitouses show up at the same hotel, and a valuable figurine goes missing, Violet is sure the sneaky family are behind it. It’s a race against time – and a hungry tiger – to uncover the truth and make sure the big day goes to plan.

Complete with two-colour illustrations throughout by Becka Moor, this is a fresh and funny mystery and readers will fall in love with Violet’s quirky charm.

"Violet and the Mystery of Tiger Island" by Harriet Whitehorn and Becka Moor is out now, published by Simon and Schuster Children's Books.

Whoah, we've reached the bottom of the bulging book sack once again for this month. Tune in when we return with another fantastic selection in October. See you then!