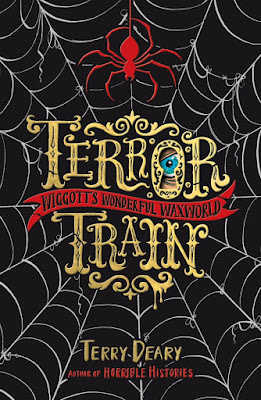 When you're used to dealing with the utterly unbelievable but true gruesome facts scattered throughout history, surely writing a terrifying fiction story should be easy, no?
The genius behind "Horrible Histories", Terry Deary is doing just that with his new "Wiggott's Wonderful Waxworld" series - kicking off with Terror Train.

Weaving a tight plot with the consummate ease with which a spider weaves its web, Terry brings a new spooky series to middle grade fiction that's every bit as gripping and fascinating as his non-fiction voyages into our deep dark past.

The story begins with a mysterious tower, a girl in a glass case, a stolen phone, a door to an old wax museum. Oh and Boy.

All things considered, things weren't going too well for Boy in Wildpool.

Not only are the police looking for him, but the worrying Arfur Loaf is on the warpath too. He can look after himself, can Boy, but going to Wiggott's Wonderful Waxworld to lie low for a while might be the worst decision he's ever made.

No - getting on the Terror Train - that's the worst decision he's ever made.

Now infamous body snatchers Burke and Hare are after him as well!

All Boy has to do is get back to his own time, escape the Terror Train and rescue the girl . . . all before it's too late. That's enough for any boy in one day.

Wonderfully fusing together nods to history here and there, but with a wholly original and spooky adventure full of fast paced action and peril, this is a brilliant new series for fans of Skullduggery Peasant and Lockwood & Co.

Get on board the Terror Train! Tickets please!