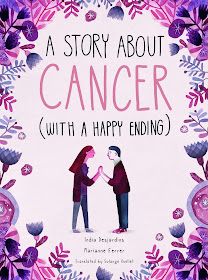 Sometimes I think we're emotionally unprepared to run a children's book blog, when you get books like this that utterly destroy you emotionally with just a few words...
"A Story about Cancer (with a Happy Ending)" by India Desjardins, Marianne Ferrer and Solange Ouellet is the sort of book that you need a truckload of tissues for, that comes with a 20 storey high mascara warning (even if you don't wear the stuff), and yet contains a hopeful, heart-expanding and racking-sob-fuelled happy message that once again puts us in no doubt of the power of picture books to enrich our lives.

Phew! Well that's quite the preamble, so let's dip in shall we?

Well it's obvious from the outset that this book is about a Leukaemia sufferer's personal journey, which India based on a real little girl she met in a Quebec hospital.

The little girl didn't like the fact that most children's books about cancer or terminal illnesses always had such unhappy endings. She wanted a happy story, with a touch of romance - and India delivered with aplomb.

In the story, we meet the girl in question as a teenager, coming to terms with her illness and chronicling her experiences with umpteen hospital visits and horrible treatments.

Despite her diagnosis of Leukaemia, and being told how much time she may have left, the girl is wise and philosophical - and the story unfolds as we begin to learn that she's about to embark on a final series of tests to determine how successful her treatments have been.

She's lost friends along the way, one friend in particular, her room-mate Maxine was her confidante, finally succumbing to her own cancer but in their time together passing on much wisdom and love.

Speaking of love, the girl finds love after a chance meeting at a party while she's in the midst of Chemotherapy. Victor is the young man in question, and the book beautifully describes their emerging friendship that eventually turns into something more. Again, if you've read "The Fault in our Stars" you'll be on familiar ground.

Though written from a teenage girl's perspective, this story really is for everyone whose lives have been affected by Cancer, or any life-changing (or terminal) illness for that matter, as the central character's strength shines through.

As we read this, collapsed in a complete heap of tears, I looked at my daughter and hugged her tight, glad that she was a big old softie like me and that the story had affected her in just the same way. Some bits (such as the Dad's 'protective shell' of trying to use rubbish humour to mask his own emotions and feelings were extremely close to home, I should add).

It's impossible to read this and not put yourself in the place of the parents - but it's also impossible for empathic kids to read this and not wonder whether they would have the wisdom, strength and sheer iron will to live the rest of their life - perhaps not knowing if the quite often horrible treatments they're going through will be successful - in the way the girl does in this book.

Then there was this panel - this was pretty much it for both of us...

I don't really know what else I can tell you about this book, other than it does deliver on its promise. The happy ending is one thing but the glorious way the girl's acceptance of her situation and level head shows a strength of character that seldom few human beings could ever be capable of, and it takes such an extreme situation as the one described in this book to perhaps bring that out. But need it? Could we all find a strength of character, a new positivity, and perhaps a completely new love of life knowing that we've got MANY years to go, not knowing when our end is due?

If you've read "The Fault in our Stars" and are in the mood for a beautifully pictorial story that follows similar lines (with such a touching love story entwined in the girl's own experiences, with a killer line about her boyfriend seeing her bum for the first time in less than ideal circumstances!) you're going to really fall in love with this book like we did.

This is beautiful. Beautifully written, beautifully translated and really beautifully illustrated (put it this way, if it was wordless it'd still completely wreck us! Quite an unusual approach for a YA novel)

It will destroy you utterly for a few hours, and every subsequent time you return to it (and you will, many many times). It's also that delicious type of book that keeps you thinking about it even when you're not reading it.

It's ridiculously early to call Book of the Year 2019 but this really should be in that list. It's that good.

Sum this book up in a (long) sentence: One of the most powerfully impressive picture books we've ever read, on a subject that we hope and pray parents and kids never have to experience directly - with a really brutal, heart-warming but hugely positive message to impart about how we take life for granted and what we could do about it.
ReadItDaddy at February 15, 2019
Share
‹
›
Home
View web version