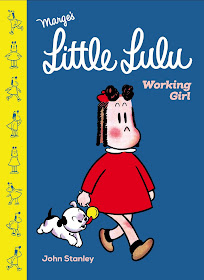 Bringing back awesome comics from yesteryear is definitely a trend we'd love to see continuing well into 2020, as 2019 has seen some brilliant compilations coming from various comic publishers.

"Marge's Little Lulu: Working Girl" by John Stanley has been gathered together into a colossal volume presented in a gorgeous hard cover by Drawn and Quarterly.

What's really interesting for us is that this comic, hailing from the "Golden Age" of newspaper-based short-run strips and 'funnies' pull-out sections in the 1940s and 1950s over the pond in the US, would have been totally lost to us if it wasn't for a publisher taking a chance on producing an excellent collected volume like this.

So who is Little Lulu? For generations of Americans she was their equivalent to our Minnie the Minx or Beryl the Peril. A little girl who wasn't just content to play with dolls or fit to the usual feminine stereotypes. Little Lulu, along with her best buddy Tubby, liked to play with catapults, get up to all sorts of hi-jinks and definitely was not content to sit on the sidelines while the boys had all the fun.

Each of the strips here reinforces what made Little Lulu such an inspirational and favourite character, often cited by celebrities as being almost unique in popular comic strip culture at the time, emerging from an era where women in comic strips were either subservient housewives, slightly dizzy (as with Blondie) or there to be rescued by some lantern-jawed goon with a gun. 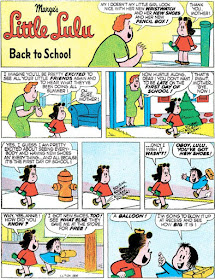 Most of the strips feel very much of the era yet their messages remain pretty timeless, and sometimes Lulu's visible frustration at the patriarchy is - sadly - all too relevant to the way the world often is today, more than 70 years after the strips first saw the light of day in Dell Magazine.

It feels somewhat ironic that the male creator of these strips had such an acute and accurate view of what it would feel like to be a 10 year old girl just wanting to join in and have fun without being subjected to discrimination and sexism. We'll slide some of the other non-politically-correct aspects of the strip under the rug, but this is a superb collection and one that had C's complete attention (and still does as it's one heck of a weighty tome, weighing in at 256 pages).

Sum this book up in a sentence: A sublime slice of awesome comic strip fun with a feminist hero who was way, way ahead of her time, created by an artist and writer with some seriously sharp observational skills.