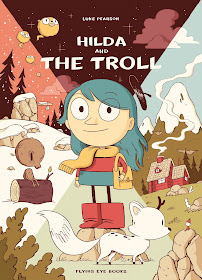 You might be wondering why comics / graphic novels haven't fetched up in our #Booky100Keepers list up till now. The simple answer is that we could easily fill an entire set of 100 blog entries recommending comics to you, but wanted to try and cover as many different books from our shelves as possible.

BUT some comics / graphic novels are just too good not to feature in this list, so Luke Pearson's sublime and peerless "Hilda" series had to be here.

I actually bought "Hildafolk" (later renamed and rebranded as "Hilda and the Troll") on a whim while visiting a comic shop. I leafed through it and knew right then and there that this would be the comic that would be the perfect introduction to this amazing means of storytelling for my daughter, who was a tiny mite at the time and hadn't progressed to the stage of solo reading yet.

As any parent will tell you, reading a comic out loud to a bouncy toddler isn't the easiest thing to persevere with - but as soon as she started to read on her own, the "Hilda" books were the ones she sought out.

"Hilda and the Troll" sets things up quite nicely, introducing the girl herself, her long-suffering mum and all manner of weird and fantastic creatures living in and around Trollberg, including the menacing trolls themselves. Hilda loves to chronicle her findings as she roams the glorious countryside picked out by Luke's amazing eye for illustrative detail. It's an idyllic life but as we follow the book series, Hilda's life changes completely with a move to the city... 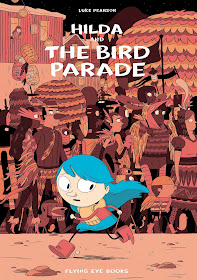 What we like most about the series is that the shift to a city-based life doesn't change the girl, nor the strangely surreal weirdness she encounters almost on a daily basis. She makes new friends, faces new dangers, even ends up turned into a Troll baby herself - but throughout each book you are given a beautifully observed slice of a young girl's life and the delicate interconnected relationship she has with her mum (a single parent) and her best friends (most of which are very weird creatures she 'collects' throughout her adventures.

It's not hard to see why Luke secured himself more work on brilliant shows like "Adventure Time" as a storyboard and intro artist. and like all good things, the Hilda books have now come to an end. However the stories live on as a Netflix show (with series 2 incoming very soon) and a series of middle grade novels (to be honest, we don't like these but much prefer the original graphic novels, luxuriously presented and absolutely immersive rewarding experiences that they are).

No better way to get kids reading comics. Nuff said.

Taking another look at the brilliant "Hilda" books, reprinted and reissued by Flying Eye Books in sumptuous new bindings

25 Comics and Graphic Novels that are a perfect jumping-in point for your kids - Part 1: Early Years and Middle Grade