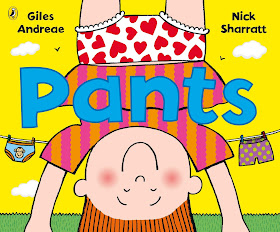 These books stretch back, far back, way back to the very origins of this blog and in fact by the time we got round to reviewing these (just after we'd started up) we'd already been reading them to C almost on a nightly basis for two years.

Yes, they're that good. In fact these books are rare in that they're picture books that both my wife and I would read to C independently of each other.

You see even from when she was a tiny, tiny baby, barely able to make out the pictures and words in the books we'd read to her, we would take it in turns on alternative nights to pick a book out of our shelves and read it to her before bedtime. Nowadays it's just me, still clinging on on there with the bedtime book, even though we both suspect C loves them now more as a method of spending some time with us, and dragging bedtime out a bit longer than for a real desire to hear the books again and again.

Back to "Pants" though by Giles Andreae and Nick Sharratt. If ever there was a book that felt more like a song (in fact in the version we own, Lenny Henry does a VERY good job of "singing" the book) it's this.

It's a daft, cheeky and surreal look at our underwear. It's also one of those rhyming books that if we think hard enough, we can actually trot out by heart. I guess that's purely because we read it so many times.

"Pants to pick a daisy, pants for being lazy, PANTS ON YOUR HEAD WHEN YOU'VE GONE CRAZY!" (typed without cheating so possibly wrong).

The follow-up is equally brilliant and also appears on our keepers list... 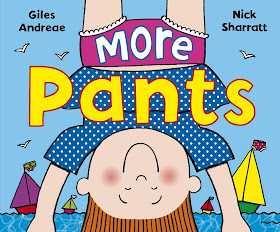 Pretty much the same deal as the first but with a few new cheeky bits and new laughs, "More Pants" followed swiftly in the original book's wake.

We later picked up "Socks" (which wasn't written by Giles, instead penned by Elizabeth Lindsay) from the library but by then the magic had died. That fleeting moment of perfection in two books was lost, and in fact I was moderately surprised to find that "Socks" wasn't where the story ended, and there are now even more pants books than ever before. It's such a successful formula though, a brilliant combination of bold and colourful illustrations underpinned by the most pitch-perfect bouncy rhymes, the perfect way in fact to draw a tiny little girl into a love of books.